A lesson learned: don’t judge a book by its cover 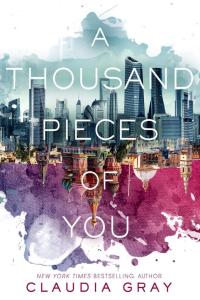 Title: A Thousand Pieces of You

Synopsis: Marguerite Caine’s physicist parents are known for their radical scientific achievements. Their most astonishing invention: the Firebird, which allows users to jump into parallel universes, some vastly altered from our own. But when Marguerite’s father is murdered, the killer—her parent’s handsome and enigmatic assistant Paul—escapes into another dimension before the law can touch him.

Marguerite can’t let the man who destroyed her family go free, and she races after Paul through different universes, where their lives entangle in increasingly familiar ways. With each encounter she begins to question Paul’s guilt—and her own heart. Soon she discovers the truth behind her father’s death is more sinister than she ever could have imagined.

A Thousand Pieces of You explores a reality where we witness the countless other lives we might lead in an amazingly intricate multiverse, and ask whether, amid infinite possibilities, one love can endure.

I had high hopes for this book, truly. From the moment I stumbled upon its cover in Goodreads, I was already in love. Reading the summary only made me that much more convinced that this would be a book like no other. Inter-dimensional travel which called on my inner Physics nerd? Murder mystery plot unraveling at a break-neck speed? Potential badass female main character? Gorgeous cover? Hell yes. I was so determined on getting this book as soon as possible that I actively searched for it every time I visited a book store. With all of this excitement in mind, I was mildly horrified when I actually started reading the book.

Let me get things straight here, this was not a terrible book and it wasn’t a terrible story either. I was just expecting so much more.  Readers can barely even comprehend how inter-dimensional travel is possible in the book as there was only minimal explanation about it, which was pretty surprising considering that it’s such a vital component of the story itself. Instead of focusing on the murder mystery plot, which I assumed was the main focus of the book, Gray decided to put the spotlight on the über cliche love triangle between Marguerite, Theo and Paul.  She writes paragraphs about Marguerite’s angsty inner struggles in choosing between the two guys (and we’re given the impression that both parties would gladly fling themselves off of a cliff for Marguerite’s sake) while readers have pretty much forgotten that there’s actually a crisis going on. After all, isn’t she supposed to be “racing” through the different universes to chase down her father’s killer as the synopsis claims?

The word “racing” is pretty ill conceived too. There wasn’t much racing or chasing anywhere. In fact, for a great portion of the book Marguerite was practically stuck in these alternate dimensions; pretending to be a different version of herself, waiting around for Theo to find her, and making zero progress in her so-called murder investigation. While Marguerite was waiting around, however, I did appreciate the different worlds that the author included in the story. For me, the highlight of the book were the alternate dimensions. I loved the little details the author included to make the readers really get a feel of these new, interesting worlds.

Another major disappointment? The characters themselves who are consistently superficial and sometimes even unmemorable. For instance, in writing this review I’ve completely forgotten the name of a supposedly important antagonist who is introduced later on in the book. Said antagonist, I checked, his name is Wyatt Conley, is deemed the “bad guy” because he wants to take control of all inter-dimensional travel through the Firebird…just because. Wyatt Conley’s character development, or lack thereof, makes him seem more of a two-dimensional super villain – you know, the ones who like to laugh maniacally and are pure evil for no particular reason –  than an actual book antagonist I can respect.

If you’re a sucker for books with a ton of  romance, especially love triangles, with a touch of action and adventure then this is a book worth reading. If you’re like me, on the other hand, and you’d prefer more action than romance I suggest you take a pass for this one. So here’s to a lesson learned: do not judge a book by its cover, no matter how stunning it might be. Take this advice from someone who expected to drown in a sea of rich character development, intricate alternate worlds, and action-packed storylines and instead found themselves standing ankle-deep in a kiddy pool of shattered expectations.

One thought on “Review: A Thousand Pieces of You”